Rehab at the Abdul Lateef Jameel Centre for Rehabilitation 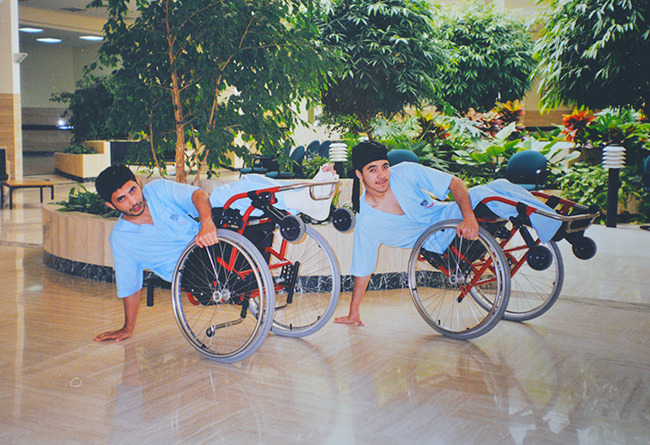 The young men were taught wheelchair skills, but the female patients weren't allowed to take part, making them more dependent than ever on other people. Fortunately, I have always been very ‘sporty’ so going to the gym and getting on with my recovery and physiotherapy exercises was an ingrained part of my nature. It was very sad to see the Saudi women there with complete spinal cord injuries, unable to get into the zone of doing any exercises, except for those that they did when pushed by the therapists - sport and exercise had never been part of their daily lives, it was anathema to them. When one of them came back from a weekend out, her physiotherapist asked her if she had done her exercises: “Yes,” she replied, “the maid did them for me.” Another one was not only devastated by her condition, but now had another major anxiety: would her husband take a new wife?

The therapists were Irish, British, Jordanian, Filipino and Palestinian, while the nurses were all Filipino. My rehab doctor was Palestinian. They were all dedicated professionals and although the sessions were challenging and tiring, they were always encouraging and ready for a laugh. My occupational therapist during my residential period was Jordanian and whenever I achieved a goal, a huge smile spread across her face and she would say: ‘Ma’shallah!’ My physiotherapist was a tiny Filipino girl whose manner and ready smile always brightened up my day. 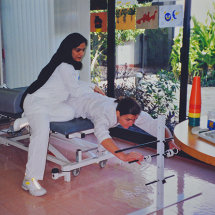 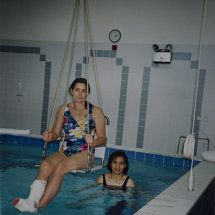 While I was at ALJ, I decided to call the editor at the Saudi Gazette, who I had worked with for many years, and asked him if he would be interested in me writing a few articles about what I was going through. He immediately agreed, so this gave me a welcome distraction. A friend lent me a laptop computer and I got permission from the Centre director to interview some of the other patients - including the two young men in their wheelchairs in the photo above. One had been in a car accident, the other had fallen from a sixth floor window. It was amazing what they were being taught to do in their wheelchairs - including go up and down flights of stairs.

During my six weeks in rehab, the physiotherapists thought that I was ‘in denial’ - perhaps I was, but they eventually realised that the medical team in the hospital hadn't told me the truth about my condition. It fell to the rehab team to break it to me that I had a rare spinal cord injury known as "Brown Sequard Syndrome", and that I would never again be able to walk without a walking stick. I was just 45 years old, and I was determined to prove them wrong. They said I should look at my rehab as being about two years long, so for the next two years, I set myself the target to walk without a walking stick.

After residential rehab was over, I continued with outpatient rehab three days a week for a further six months, followed by intensive one month bursts of rehab at the Royal National Orthopaedic Hospital in London. No matter how hard I exercised and worked at my walking, as the end of the two year rehab period drew to a close, it became painfully obvious that my walking was still very slow and awkward, with severe balance problems, and that walking without a stick was nowhere in sight. The more I re-learned how to walk, the more I realized what a complex neurological process walking is, and what an amazing amount of information travels instantaneously back and forth between the feet, the joints, the muscles and legs to the brain.

Journey With my Wheelchair Story
Previous