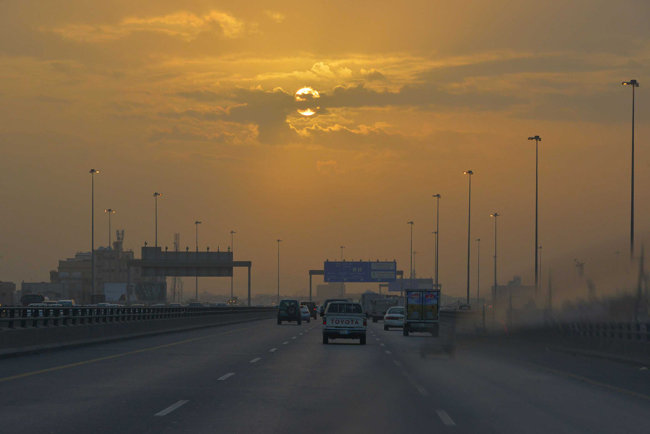 The first leg was a long ride/drive of 760km to Jizan in southern Saudi Arabia, just north of the Yemeni border. I had been wanting to go there for years after seeing photos of villages with African-style mud huts. The road is pretty good, but there were lots of road works going on, expanding and repairing an already good dual carriageway. 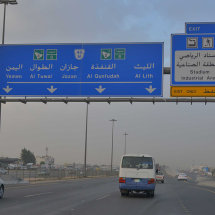 Throughout most of Saudi Arabia, petrol stations are plentiful so we stopped regularly at roughly 90 minute intervals to refuel and stretch our legs and have a drink. We had brought our own picnic as well. The day was very hot and I was finding my heavy biker jacket, with all its protective padding, very uncomfortable. Fortunately, Richard had brought along a second light weight one. 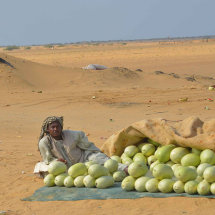 After Al Lith, we went through about 100 kms of sandstorm and we were constantly being buffeted by the strong wind. Although Peter & Tanya were well protected in their air-conditioned luxury, I still preferred living with the elements on the back of the bike. What is strange about sandstorms is that although you are surrounded by a thick cloud of sand, if you look up, you can usually see clear blue sky. 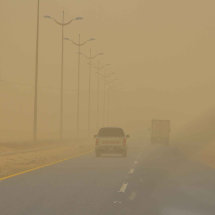 There were MASSES of speed bumps on the road, and at one point they appeared out of the sandstorm without any warning. I had always wondered what would happen if you hit one of these at speed on a motorbike - now I know! We leapt quite high into the air, but landed safely, just in time to leap into the air again, as the second bump was so soon after the first. Richard had had to spray all Maridadi’s chrome & paintwork with a special coating (commonly used on cars in Saudi Arabia) to protect her from being sandblasted.

One of my favourite Saudi road signs is the one placed just before a village or small town that says: ‘Inhabited Area’. Occasionally, these settlements look like ghost towns. For whatever reason, they haven’t succeeded, have been deserted, and finally overcome by the ever-shifting sand. The skeletons of buildings remain, and sand dunes have built up inside as well as around them. Riding through them during a sandstorm made these areas look even more desolate. 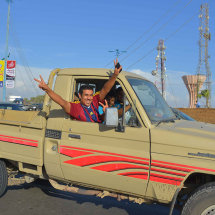 Soon after Al Qunfudhah, the road ran alongside the sea and the on-shore breeze blew all the sand away, leaving the air and view clear again. On the beach we could see coloured umbrellas, made out of a semi-rigid material, very typical of Saudi Arabia, and put there by the local authorities for the citizens to enjoy their evening picnics. 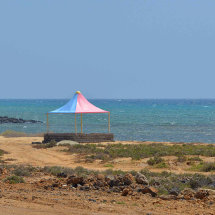 Jizan’s suburbs began a good half hour before reaching the main town. We passed extensive industry and development, and then an area of farming. The people that we saw on the roadside appeared to be largely Yemeni judging by their clothing. They wear either jeans and a T-shirt, or a shirt with a sarong like garment tied around the waste. They had set up numerous stalls selling melons and mangos, as well as much larger stands with colourful pottery, hoping for custom from the passing traffic. There wasn’t time to stop to get a better look, but I had a feeling we would be returning there the next day. 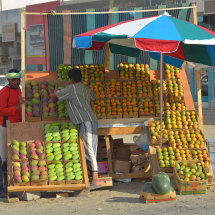 This was our first Saudi trip where we had our own GPS and it proved very useful in finding our hotel, and we parked Maridadi outside the Best Western 17.10 pm. Unlike hotel staff in Jeddah, no one here spoke English. Once we had unpacked in the clean and spacious suite, Richard commandeered the help of one of the hotel staff and they spent a good hour cleaning the sand-encrusted protective layer off Maridadi. Unfortunately, they used a brillo pad to clean the chrome exhaust – not a great idea, but it did get the sand off!

Our guide for the next day, a Saudi called Mansour, arrived to discuss what we wanted to see. It had been difficult finding someone who knew exactly what we were talking about, but he seemed to know about the Arish mud hut settlements that I was talking about.

We had an excellent and very reasonably priced supper of grilled fresh ‘hamour’ – the Arab name for the fish we know as grouper, followed by an early night.

While the others all went to bed, I stayed up for several hours preparing photos and a post for my Facebook blog.
Farewell Tour of Saudi Arabia 2015